Review of Nevertheless by John Kirby 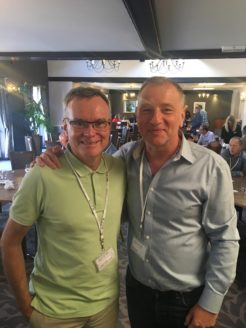 But if you’re not a believer, please don’t be put off, as this is such an inspirational tale of a man with a singular focus that ultimately has, and is, affecting the lives of thousands of people in a positive way.

John Kirby is a Bradford lad with a troubled past which included highs and lows, but the experience of those lows, and in particular the low of being heavily in debt, and the effect that had on him as a single parent at that time, the guilt, the shame, the rejection and the fear led him to set up CAP UK.

‘Nevertheless’ is the story of John and CAP which started with a vision, a simple faith, a single minded belief and no money! Today there are CAP centres not only across the UK but also in Australia, New Zealand and Canada.

I have had the honour of meeting John on a few occasions, and I’ve also seen him doing his job. I attended an ‘awards evening’ to celebrate some of the many who had their lives turned around through CAP. Each story had a common event: Self harm or attempted suicide. That’s the lows that debt can pull us down to, but through proper budgeting and CAP advocating on their behalf, these humble men and women talked about saved marriages, returned dignity, savings and most importantly hope.

There’s an economic law called ‘The law of diminishing returns’ or sometimes called the ‘marginal utility of satisfaction’ which states that there comes a point where the satisfaction, or benefit starts to decrease from a level or increased amount of input. In the case of John Kirby (input) this law seems not to apply. The sheer joy he derives (output) from each person freed from debt, (and yes, in many cases, becoming Christians) never seems to decrease.

There are many successful entrepreneurs who are driven people, but in so many cases I sense the overriding motive to be selfish. What is inspiring about this book is that Kirby is so evidently selfless. In a world where we are ever more conscious of our social responsibility to society as a whole, it is the likes of John whom I look up to as a role model. In my business, I have the good fortune to make a reasonable living, but I want to make sure that the responsibility that comes with that, I take seriously, and that I can make a difference in the lives of others.

If you would like a copy of John’s book, do drop me an email, I have plenty of copies which I want to give away. It will inspire you to make a difference too!